A popular technique for studying genes from different organisms plus a new carrier to transfer them to plants have yielded a powerful tool for understanding crops better.

A plant virus with a simple genome promises to help crop scientists understand traits and diseases in wheat and maize more quickly and easily than existing techniques and, as its full potential is tapped, to work across a range of different plant species.

The Foxtail mosaic virus (FoMV) has now overcome the limitations of existing carriers, or vectors, to enable a much greater range of proteins to be expressed in host plants. It uses an established and popular technique known as virus-mediated overexpression (VOX), reports a team of investigators led by Rothamsted Research.

The team, which also includes Syngenta Technology in the US and Syngenta Crop Protection in Switzerland, selects genes from different organisms, including fungal pathogens, and transfers them into cereal crops. It then investigates the genes’ functions by studying the effects of the proteins that they express. The team’s findings are published in full in the August edition of Plant Physiology.

“The development has stirred much interest among cereal pathologists around the world since preliminary findings began to emerge in early June,” says Kostya Kanyuka, a molecular plant pathologist at Rothamsted, who led the study and whose group specialises in state-of-the-art functional genomics.

“You don’t need the whole (stable crop transformation) kitchen,” says Kanyuka, emphasising the simplicity and cost effectiveness of his team’s latest development. “And we’ve demonstrated successful expression of proteins up to 600 amino acids long, at least three times larger than was possible in the past.” 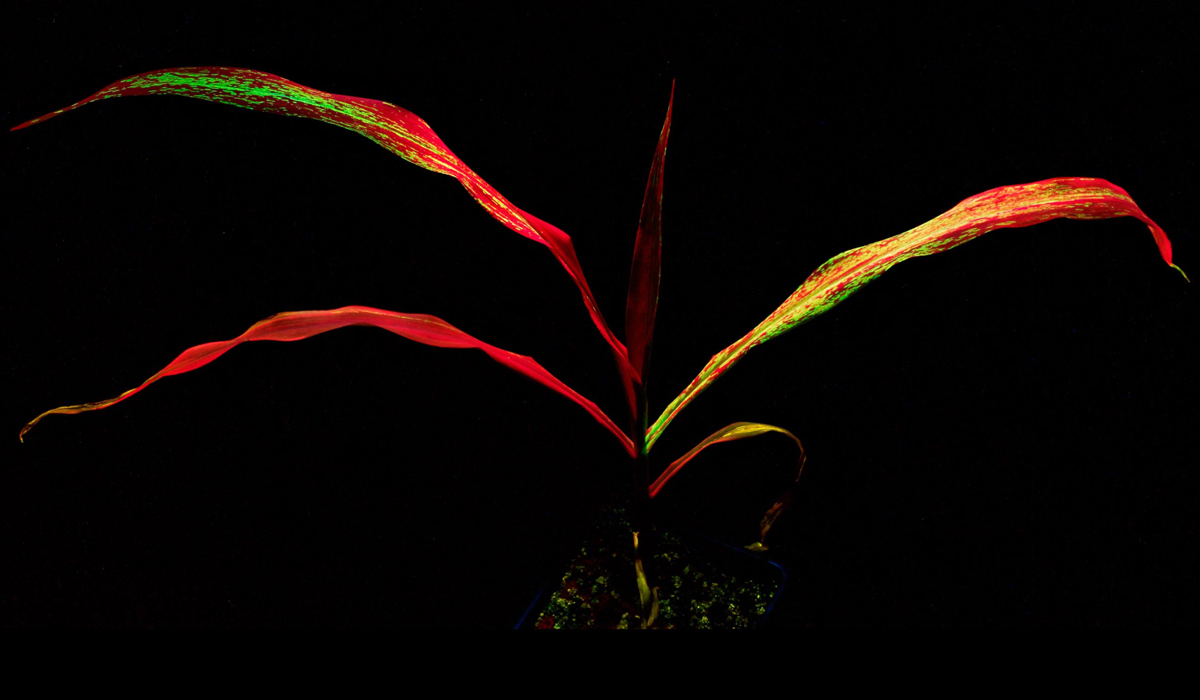 Neat fix: green fluorescent protein (GFP) under ultra-violet light highlights the green-yellow areas of a maize plant that have been “infected” with the new viral vector

Kanyuka notes: “The new FoMV-derived vector PV101 enables rapid and cost-effective expression of proteins in cereal plants as a route to understanding the function of their genes. And the range of proteins that can be expressed using this vector is wide, plus the new vector overcomes limitations of previously available VOX vectors.”

According to Kim Hammond-Kosack, who leads molecular wheat disease research at Rothamsted and is a member of the team that developed the new vector: “The level and duration  of expression of proteins of interest, both locally and systemically from the new FoMV-VOX vector, is impressive. It’s enabled us to ramp up our de novo protein screening rate in wheat plants, and this is already benefiting several research projects.”

“The team has worked well together, exchanged ideas and expertise between different sites to develop a new VOX system to meet Syngenta’s objectives with an ambitious timeline,” notes Bieri. He adds: “We are all pleased that the powerful VOX system is available not only for the wheat community within Rothamsted Research and Syngenta but for others as well, including the maize community.”

The new FoMV-VOX vector is covered by a Material Transfer Agreement, which enables Rothamsted to make its technology developments available as open access and free of charge.

About Syngenta
Syngenta helps humanity face its toughest challenge: how to feed a rising population, sustainably. Farmers are at the heart of everything we do. We apply world-class science and the most productive research and development in the industry to achieve a step change in agricultural productivity. In more than 90 countries around the world, our employees enable millions of farmers to improve global food security by making better, more sustainable use of available resources.