A proposal to build homes, regenerate land along the River Ver and bring community benefits to a local area is being drawn up by the charitable trust behind Rothamsted Research, the world-class centre for agricultural science based at Harpenden.

The plan, which proposes up to 1000 new houses, would lift the number of local homes to a level that could potentially support a local secondary school and increased primary provision. An aerial view of the Rothamsted estate highlights the land being considered for redevelopment.

The proposal is sensitive to local needs and includes potential for improvements to existing facilities as a significant contribution to building a sustainable community locally, as part of broader district plans.

St Albans City & District Council has started a consultation process to develop its “Strategic Local Plan”, a process that is designed to inform its planning policy from 2020-2036. An important part of this plan is housing, with Government guidance targeting in the region of 15,000 new homes across the district over the period.

As a part of this process, the District Council has recently commenced a “Call for Sites”, inviting all landlords in the district to submit proposals for the release of green belt land for residential development. 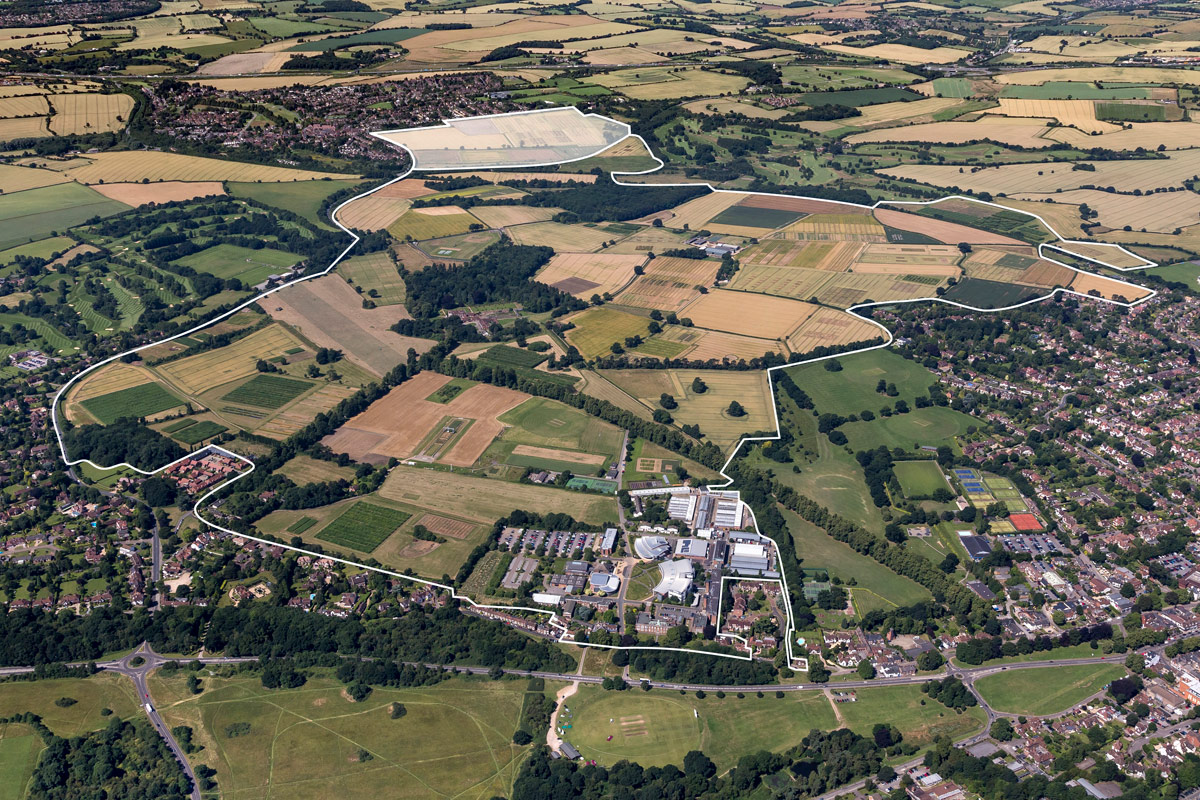 Rothamsted estate, bounded in white, proposes the redevelopment of land to the west of the site, near Redbourn

The process prompted the Lawes Agricultural Trust (LAT) and Rothamsted Research to work together to consider the local opportunities that this development could provide.

“As one of the largest employers in the area, we are acutely aware of the shortage of affordable housing, not only for our own staff, but also for key workers locally, such as teachers and nurses,” said Peter Oxley, chief executive of LAT.

“We hope that our plan, in consultation with the local community, can go part way to addressing that need, with our intention being that any potential development would seek to include a good proportion of social and affordable housing, as well as potential for self-build homes,” noted Oxley.

He added: “The trust has historic links with the area stretching back some 175 years. We want to be part of a sustainable future that keeps the area attractive to young people seeking high quality jobs and to local people who want to strengthen their community close to home.”

LAT provides funding and support to Rothamsted Research, as well as the land and buildings where research staff work. Sir John Bennet Lawes, who began research on the site in 1843, created LAT in 1889 when he placed in trust his laboratory, his experimental fields at the Rothamsted Estate and £100,000. The LAT’s objectives have been closely aligned with those of Rothamsted Research ever since.

Director and Chief Executive of Rothamsted Research, Achim Dobermann, sees the proposal as a potentially important step to ensure the long-term future of the institute: “Income from this development, through the LAT, would allow Rothamsted Research to do more of its strategic research on the future of farming in the UK and worldwide.”

He added: “Pressures on funding and research grants continue. We need to consider all options to safeguard the continued sustainability and success of Rothamsted Research.”

Dobermann noted: “We want to ensure that whatever we do provides benefits not only in terms of finance for ourselves, but also significant benefits for the Redbourn and St Albans communities as well, by doing this in a way that results in mutual benefits.”

The land being put forward for consideration is fields to the north east of Redbourn, between the A5183 and Harpenden Lane/Dunstable Road (the fields known as Black Horse, Bylands, Meadow, Osier and Ver).

The proposal is at a very early stage, with a submission being produced for the District Council’s Call for Sites. As the plan takes shape, LAT and Rothamsted Research will welcome wide input from the local community.

Image:
Rothamsted Flickr
Rothamsted aerial: Rothamsted estate, bounded in white, proposes the redevelopment of land to the west of the site, near Redbourn.

LAT’s Object is “to advance the science of agriculture for the public benefit through original investigation and research, which may embrace all or any subject(s) connected to or bearing upon agriculture, including animal or vegetable physiology, meteorology, botany and chemistry.”

LAT’s main assets are the land and buildings at Rothamsted, Harpenden, and at Brooms Barn, Suffolk. As such, the trust utilises its assets to pursue its Object as follows:
• Provision of land and buildings suitable for agricultural and related sciences conducted by Rothamsted Research;
• Provision of accommodation to key workers, students and staff – enabling them to move into Harpenden on modest scientific salaries;
• Granting financial support for scientific costs to Rothamsted Research, mainly through a “Director’s Vote” fixed annually by the trustees;
• Playing an active role in taking forward the Rothamsted campus to enable interaction with small companies, actively enhancing the uptake of agricultural and environmental research across different communities, in conjunction with RoCRE Limited. (RoCRE is Rothamsted Centre for Research & Enterprise.)