Expertise in viruses and high security containment brought Rothamsted Research into a multinational team that has just won a major battle in the war against a genetically versatile fungal pathogen with a long record of devastation of wheat production globally.

The team, from Australia, the US and the UK, identified a gene in the fungus that triggers resistance in the host plant and have begun to understand how the fungus mutates to neutralise this avirulence gene to overcome the resistance pathway. Their findings are reported today in Science.

“For the first time, it will be possible to do DNA testing to identify whether a rust in a wheat crop anywhere in the world can overcome a rust-resistance gene, called Sr50, which is being introduced in high-yielding wheat varieties,” says Robert Park, Professor of Sustainable Agriculture at the University of Sydney and co-leader of the research team.

“This will indicate whether or not a given wheat crop needs to be sprayed with expensive fungicide quickly to protect against rust, which would otherwise devastate the crop in a matter of weeks,” adds Park.

The research is the first important step in addressing the diagnostic challenges posed by ever-changing fungi, which result in new rust pathogen strains, according to Jaipeng Chen, a PhD student who works with Park. Chen, who is lead author of the Science paper, initiated the work by sequencing and analysing the genome of a virulent rust stain. 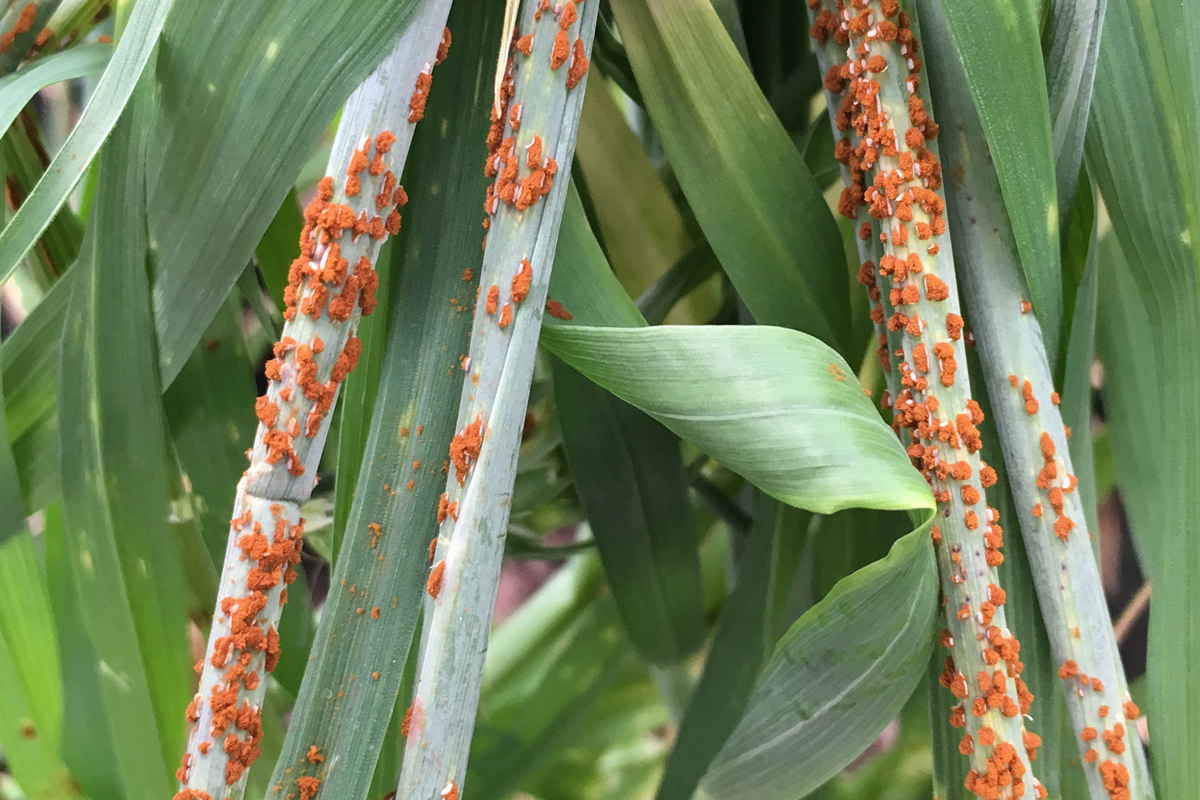 In warm, dry conditions, the fungus, Puccinia graminis f. sp. tritici (Pgt), causes stem rust (also known as black rust), which has wiped out wheat crops throughout history. A particularly virulent form, Ug99, has spread across Africa and the Middle East; Asia is threatened, and other virulent strains have caused outbreaks recently in Europe.

“We can now survey distribution of avirulence genes in Pgt populations and anticipate the evolution of virulence,” says Peter Dodds, the team’s other co-leader and a specialist in fungal rust diseases at Australia’s Commonwealth Scientific and Industrial Research Organisation (CSIRO). “This information can help prioritise resistance genes for deployment in different geographic locations.”

Wheat varieties are already bred to contain known genes that confer resistance to stem rust, notably Sr50, which can still control the fungus. These resistance genes inhibit infection by detecting “effector” proteins that the pathogen’s avirulence genes express. But it’s a hit-and-miss affair.

“We didn’t know which stem rust proteins were recognised by wheat resistance genes,” says Dodds. “Therefore, we couldn’t predict the likelihood of evolution of new virulent strains or the durability of particular resistance genes.” The latest findings of his research team are changing all that.

Work in Dodds’ lab on model tobacco plants pointed towards a particular fungal gene as the likely avirulence candidate of the resistance gene Sr50. However, it needed confirmation of this hypothesis through further tests in wheat, which is where Rothamsted came in.

Stem rust on wheat head, by when control with fungicides is usually not possible Credit: Karanjeet Sandhu/Univ Sydney

Rothamsted has developed a virus-based system that can deliver alien proteins inside wheat cells, known as virus-mediated overexpression of heterologous protein (VOX). In this research, the viral vector was barley stripe mosaic virus.

“When the VOX vector produced rust effector proteins from the candidate gene in wheat without Sr50, we observed virus-induced mosaic symptoms in the plants, indicating infection,” says Kostya Kanyuka, a specialist in functional genomics at Rothamsted.

Kanyuka continues: “However, this same VOX vector was stopped in its tracks completely in wheat with Sr50, indicating the resistance gene’s recognition of the effector protein candidate and its induction of strong defensive responses against the virus.”

Although the work was performed inside a “level-3” containment facility, the most secure for plant science, no fungus or stem rust entered Rothamsted; both pathogen and disease are controlled substances, and their use would require special permits.

Kanyuka adds: “I consider this data to be solid proof of concept and envisage expansion in the use of our VOX system for rapid identification of avirulence genes from other rust species, such as stripe and leaf rusts, and from other wheat-infecting pathogens.”

Performing the work in the laboratory as a “transient transformation”, which operates only during the individual plant lifespan, rather than as a “stable transformation”, which would involve genetic modification of the genome and testing by growing the wheat, saved considerable time and money. And solutions are needed quickly. 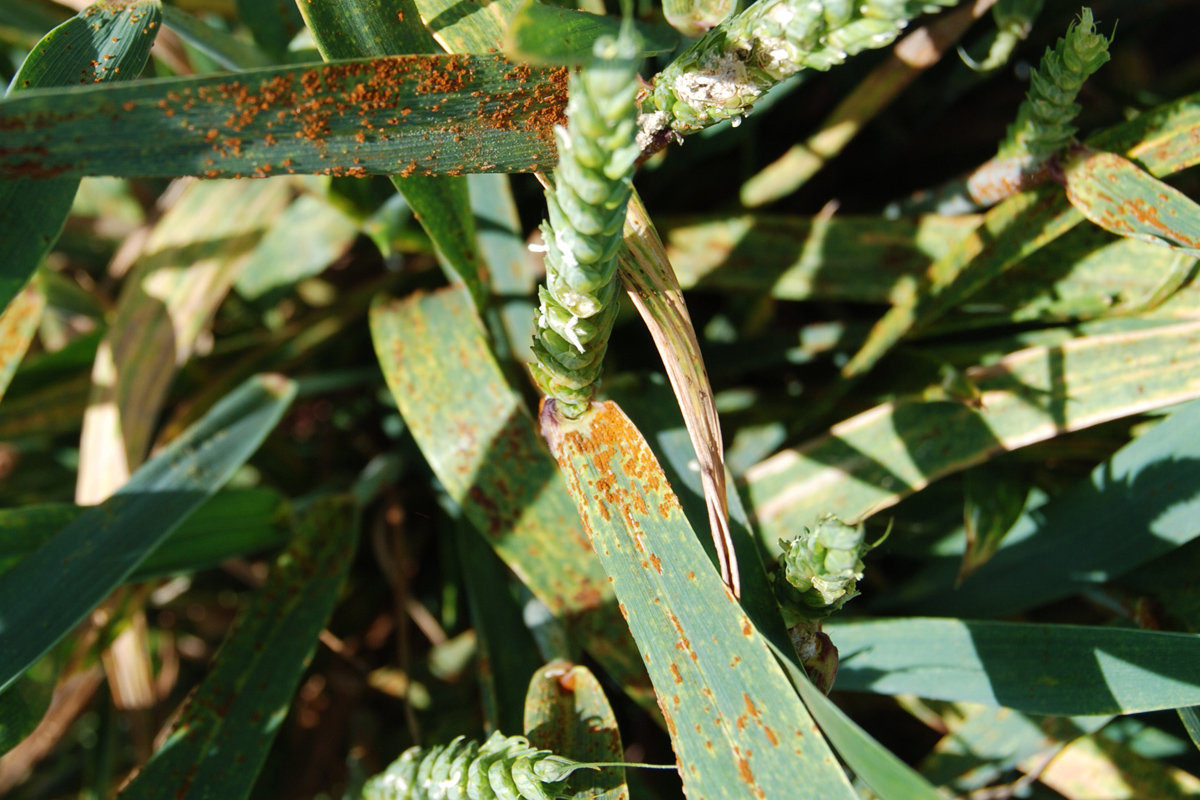 The highly virulent Ug99 form of the stem rust fungus, which emerged in 1998 in Uganda, has become even more potent as it has spread through Africa and the Middle East, with winds threatening to carry it into Asia.

Europe has not detected Ug99, so far. Although stem rust has occurred only once in the UK over the past 40 years, other new fungal strains appeared in Germany and Denmark in 2013, in Sicily last year and in Sweden this year. The disease continues to be a threat in North America.

US collaborators Melania Figueroa and Brian Steffenson, from the University of Minnesota, and Yue Jin, from the US Department of Agriculture’s Agriculture Research Service, extended the results of the study by examining strains of the stem rust pathogen from other parts of the world, including the US and Africa.

“It is important to look at this gene in worldwide rust strains to gain a picture of where virulence is most likely to evolve,” says Figueroa, assistant professor in plant pathology at the University of Minnesota.

There is no time for complacency, says Park: “It’s like an ongoing arms race – we’ve got to keep one step ahead of this changing pathogen. The last major epidemic of wheat stem rust in Australia alone, in 1973, caused $AU300 million [$225M]; imagine what that would be today.”

According to Dodds, demand for wheat in the developing world is expected to jump 60% by 2050 and, in economic terms alone, the ramifications are huge.

About the University of Sydney
As Australia’s first university, our reputation spans more than 160 years. In 2016, the University of Sydney ranked in the top 0.3% of universities worldwide, including 46 in the QS World University Rankings. We taught more than 50,000 undergraduate and postgraduate students, including more than 10,000 international students from more than 140 countries. With more than 6400 academic staff, and 70 research and teaching centres, we offered the widest range of academic programs of any Australian university. We connected with our 300,000 alumni around the world, and our students took part in 300 exchange agreements in more than 30 countries.

About CSIRO
CSIRO, Australia’s premier national research organisation and inventors of the Wi-Fi technology found in over five billion devices today, employs a team of more than 5,000 world-class scientists, engineers, technologists and economists to deliver solutions for some of the world’s most challenging problems.
Through innovative technology development and groundbreaking research, we imagine, innovate, and collaborate with global partners to provide the commercially relevant technological solutions necessary to advance innovation and change the world.

About the University of Minnesota
The University of Minnesota, founded in the belief that all people are enriched by understanding, is dedicated to the advancement of learning and the search for truth; to the sharing of this knowledge through education for a diverse community; and to the application of this knowledge to benefit the people of the state, the nation and the world. The University's threefold mission of research and discovery, teaching and learning, and outreach and public service is carried out on multiple campuses and throughout the state.