Alongside 23 Nobel laureates, two Rothamsted staff are named among this year’s global elite

Expert in soil and plant nutrition, Professor Steve McGrath has been named on the 2019 Highly Cited Researchers list – his eighteenth consecutive appearance in the rankings.

Also back on the list this year is his colleague, Professor Peter Shewry, whose work aims to improve human health by upping the nutritional quality of cereal grains.

Professor McGrath has now been on every single highly-cited list since it was started in 2002 – a rare feat.

The pair’s inclusion comes despite the UK slipping to third place in the rankings behind mainland China, with the USA retaining top spot.

Admission onto the list comes from having your research ranked by your peers in the top 1% world-wide.

This is determined by the number of times the researcher’s academic publications were cited by others during the period 2007-2017.

The Clarivate Analytics Highly Cited Researchers list is compiled using the top publications from the database Web of Science in 21 fields of study.

The list of more than 6000 names includes 516 from the UK, and the two Rothamsted researchers help make up the 2,491 academics celebrated for working across multiple fields of study.

Professor McGrath (pictured on the right) attributes his success to the collaborative and multidisciplinary nature of his research.

“It is very rewarding to know that working with colleagues I have been able to reach this high international level for sustained period, but on reflection this probably results from that fact that we started doing long-term international research more than twenty years ago,” he said.

“Now, more than ever, we need teams that are specifically tailored to solve the major problems in the world such as food, nutrition and climate change. I am proud to have worked with so many excellent scientists and thank them for their collaboration.”

Director of Rothamsted Research, Professor Achim Dobermann said he was very proud of the researchers’ achievement.

“For two staff from Rothamsted Research to make it onto the list shows the truly international impact Rothamsted’s research is having, and how the Institute is leading the way in sustainable farming research.” 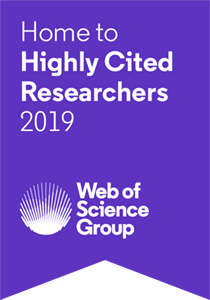 The methodology that determines the "who's who" of influential researchers draws on the data and analysis performed by bibliometric experts from the Institute for Scientific Information at the Web of Science Group.

David Pendlebury, Senior Citation Analyst at the Institute for Scientific Information said: “Recognition and support of these exceptional researchers represents an important activity for a nation or an institution's plans for efficient and accelerated advancement. The Highly Cited Researchers list contributes to the identification of that small fraction of the researcher population that significantly extends the frontiers of knowledge.

"These researchers create gains for society, innovation and knowledge that make the world healthier, richer, more sustainable and more secure.”