OUT OF THE CLASSROOM AND INTO THE LAB

Four Nuffield scholars who worked in laboratories at Rothamsted Research this summer were among other pre-university teenagers honoured this week at a graduation ceremony that marked the 21st year of the Nuffield Research Placements scheme, which promotes interest in science, technology, engineering and mathematics.

The celebratory event, organised by Setpoint Hertfordshire on behalf of the Nuffield Foundation, was jointly hosted in Luton by the UK Centre for Carnival Arts and the University of Bedfordshire. The foundation is honouring around 60 placements in the eastern region this year (and more than 1000 nationally) but, with more funding, it could be engaging 100 young students from the region, it says.

The ceremony showcased the diversity of the projects that had engaged this year’s budding scientists and technologists for between four and six weeks in July and August. The students, mostly aged 16 or 17 years old, ran the projects independently with the guidance and support of supervisors, many of whom attended the celebration.

Topics ranged from autonomous robot construction and endobronchial ultrasound to dementia friendly communities and aero life engine prediction, as well as biological pest control. Aside from Rothamsted, project providers included Airbus Defence and Space in Stevenage, GlaxoSmithKline in Ware and the universities of Hertfordshire, Bedfordshire and Cranfield.

Poster exhibits and detailed reports summarised achievements and emphasised how the scheme was not about work experience but about engaging in well-defined research projects that offer students a taste of what life is like as a scientist, technologist or engineer. Bursaries encourage wide participation.

The Nuffield scholars who came to Rothamsted were not looking for careers in agricultural science, and they are still not, but they all say they had rewarding times on site, which helped to refine what they hope to study when they move into higher education. 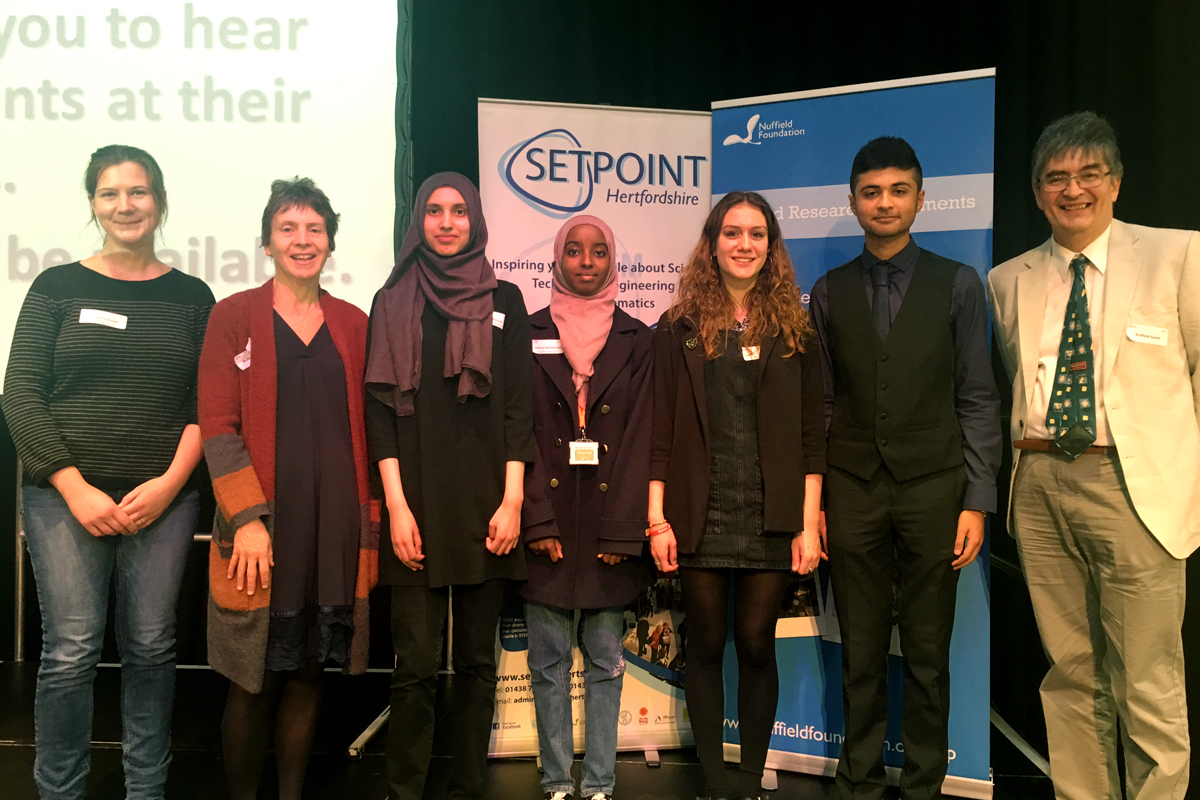 “I hadn’t heard of Rothamsted [but] it was really cool,” says Cherry Halfyard (The Hemel Hempstead School). “Everything was so high-tech, with proper professional equipment, and I even had my own desk.” She investigated whitefly, which carries viruses that threaten crops, studying whether volatile compounds emitted by plants could be harnessed to repel the insect pests naturally.

Her supervisor, chemical ecologist Steffie Schlaeger, had not been involved with the Nuffield scheme before: “I was excited and nervous,” she says. “I thought a lot about the work that [Cherry] could do independently and come to no harm,” she recalls. “It’s very important to have real experience of science; it helps you to know what you want and what you don’t want.”

Cherry had been encouraged to apply to the Nuffield scheme by her sister’s experience, nine years earlier; Rosy Halfyard’s project had led to the national Big Bang Fair and a trip to the Intel International Science & Engineering Fair in Reno, Nevada, all expenses paid. Rosy worked in a blood products laboratory for her Nuffield project, and is now training to be a GP.

Cherry’s work has convinced her to study biology, she says, but of humans rather than insects.

Zafirah Hussain (Barnfield West Academy, Luton) signed up to the scheme to gain experience of real science after hearing a presentation by the Nuffield Foundation: “Rothamsted offered the closest match to the chemistry that I want to study.”

Zafirah had to test how pest beetles responded to a variety of odour sources, from laboratory strains of plant pathogens to synthetic volatile compounds. She enjoyed the laboratory work but less so the beetles, and is now planning to stick with pure chemistry.

For her supervisor, chemical ecologist Jozsef Vuts, the first-time experience was valuable for Zafirah and for him: “She has learnt a number of techniques and approaches that broaden her horizon and might be useful later in her career,” he says. “It was also great value for me because we got really nice results, enabling me to get two projects completed.”

Hasan Haq (Luton Sixth Form College) stayed for six weeks at Rothamsted, the longest spell among this year’s cohort of students. He worked with horticulture and controlled environments specialists Julian Franklin and Fiona Gilzean in the glasshouses, looking primarily for a natural replacement for Dimlin Flo, a pesticide used to control sciarid flies. The research involved monitoring more than 400 pots of Arabidopsis thaliana and counting a lot of flies.

“I learned much about how to manage my time well and even more about the application of statistics to real data that I had collected,” says Hasan. The Nuffield project has convinced him to shift away from laboratory work and to focus his efforts on Mathematics and Economics.

Franklin and Gilzean are disappointed that Hasan is not staying in agricultural science but recognise that the field needs bioinformaticians as well. “I’m interested in encouraging people to do Science and, if they do plant science, that’s a bonus,” says Franklin, who has been sponsoring Nuffield scholars at Rothamsted for over 10 years. Gilzean emphasises the value of the work that the students do: “If we had to do [the projects] ourselves, we’re be doing smaller trials because we don’t have the resources to do more.”

Aamina Mohammed (Luton Sixth Form College) was tasked with confronting an age-old conundrum of whether there is interaction between the two wheat pests, the fungal pathogen Septoria and the bird cherry-oat aphid. Aamina was unique among this year’s cohort in coming up with a negative result; she found no link.

But the outcome does not worry Aamina. “The negative result isn’t a problem. I came for the experience. I wanted to try science in real life,” she says. “I didn’t believe it would really happen, that I would get chosen to go. Rothamsted is chilled, not stressful.”

Aamina is also full of praise for her supervisor, PhD student Amma Simon. “I got the chance to adjust the experiment, and Amma taught me techniques. We worked together on the poster and the report throughout the project, adding data as we went along at Rothamsted.” In the end, Aamina got the positive result that she wanted; the project has confirmed her choice to study chemistry.

Information for students on how to apply for 2018 placements can be found on the Nuffield Foundation website.