Bumblebees regularly tackle the Travelling Salesman Problem to improve their foraging routes, a skill that promises to yield solutions in the fields of robotics and logistics

Few people draw a parallel between bumblebees and travelling salesmen but that’s what comes after months of tracking the flight paths of the pollinators as they forage for food in and around an array of artificial flowers in the fields within Rothamsted Research.

Bees, like those archetypal salesmen it seems, refine their routes around multiple destinations and, in the process, provide insights into analogous problems in logistics and robotics and into how land might be used more efficiently, reveals research published today in Scientific Reports.

“We tempted the bees with shortcuts between feeding stations that increased the total distance they travelled to visit all the feeders,” says Joe Woodgate, lead author from Queen Mary University of London, which drew on Rothamsted’s technical expertise as well as its landscape for the research.

“We then watched as they explored different flight paths around the feeders and developed habitual routes,” notes Woodgate, who is a postdoctoral researcher in QMUL’s School of Biological and Chemical Sciences.

The team found that, initially, the bees often fell for the trick, opting for short-term gain over long-term pain. But they gradually refined their flight paths, reducing their overall travel distance, though without ever visiting the feeders in the best possible order. 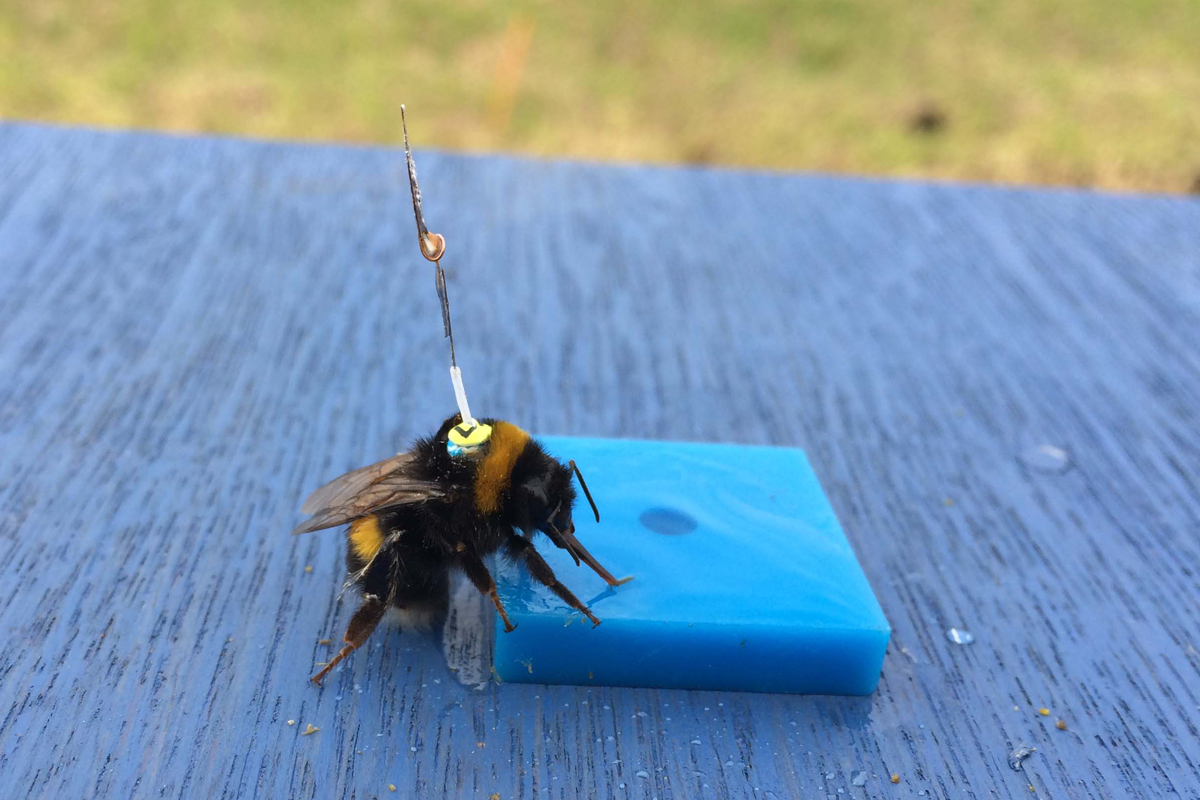 “In this study, we took the unusual step of following individuals continuously as they gradually developed solutions to a spatial problem; previous work relied on only a few snapshots of the bees’ activity,” notes Woodgate.

He adds: “The result is one of the largest and most complete datasets on bee flight ever recorded and provides an in-depth look at route development for the first time ever.”

The team used harmonic radar to track 6 bumblebees making 201 flights in total; a tiny transponder on the bee doubles the frequency of the incoming signal to the next harmonic so that the reflected signals from the bee can be distinguished from reflections from elsewhere

“We tracked every single foraging flight that the bees undertook as they learned about the feeder array, with the radar telling us the position of the bee every three seconds, to an accuracy of 2 metres,” says Woodgate.

He adds: “Animals cannot inspect a map to find out where the best food sources are or plan how to get to them; instead, they must explore the landscape, discovering locations one by one, and then they face the challenge of integrating their spatial memories into an efficient route.

“Only by following the flight paths of bees as they explore and try to generate better routes can we start to truly understand how animals solve route optimisation problems.” 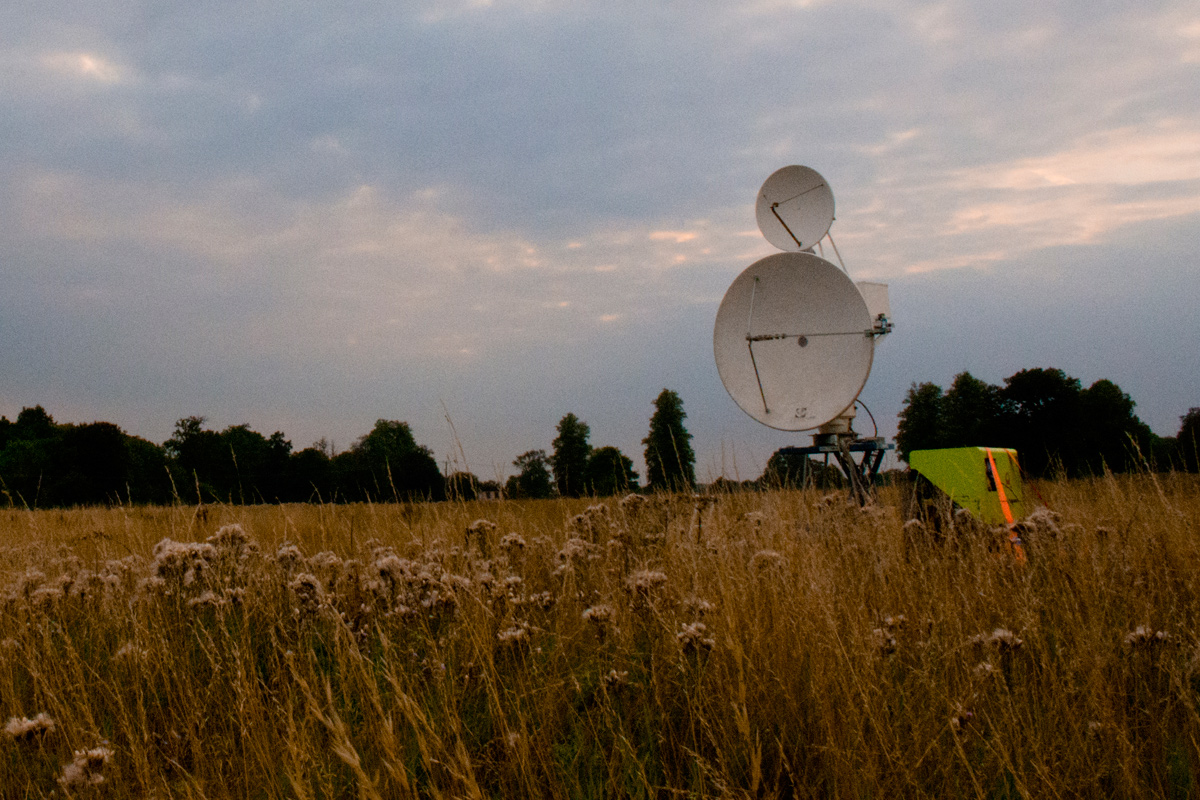 The radar tracks have yielded videos, in the form of animated heatmaps, that show the routes taken by the bees as they foraged. These heatmaps demonstrate graphically how some segments of route became habitual while other explorations were forgotten as preferred flight paths evolved.

“It’s also important to understand how bees and other pollinating insects search for food and use the landscape,” notes Makinson. Such knowledge, he says, “is crucial to managing the risks to pollinator services posed by habitat loss and agricultural intensification.”

Pollinator services are threatened by intensification, fragmentation and habitat loss, says Andy Reynolds, theoretical physicist at Rothamsted and the team’s data analyst. “Accessing and forecasting these risks requires an understanding of how pollinators use the landscape.”

The global economic value of ecosystem services is worth around 10% of global food production, or over $200 billion, says Jason Lim, the team’s senior electronics and radar engineer at Rothamsted: “The need to understand the movement of both migratory insect pests and pollinators is more important than ever if agricultural production is going to feed a human population of 10 billion by 2050.”

About Queen Mary University of London:
Queen Mary University of London (QMUL) is one of the UK's leading universities with 23,120 students representing more than 160 nationalities. A member of the Russell Group, we work across the humanities and social sciences, medicine and dentistry, and science and engineering, with inspirational teaching directly informed by our research. In the most recent national assessment of the quality of research, we were placed ninth in the UK amongst multi-faculty universities (Research Excellence Framework 2014). As well as our main site at Mile End – which is home to one of the largest self-contained residential campuses in London – we have campuses at Whitechapel, Charterhouse Square, and West Smithfield dedicated to the study of medicine and dentistry, and a base for legal studies at Lincoln’s Inn Fields. Queen Mary began life as the People’s Palace, a Victorian philanthropic project designed to bring culture, recreation and education to the people of the East End. We also have roots in Westfield College, one of the first colleges to provide higher education to women; St Bartholomew’s Hospital, one of the first public hospitals in Europe; and The London, one of England’s first medical schools. Today, as well as retaining these close connections to our local community, we are known for our international collaborations in both teaching and research.