Surplus and freely available atmospheric data from weather-tracking ground stations in the US have enabled scientists to unlock a classic mystery of insect flight that will provide farmers with more notice of pest strikes to enable them to protect crops more efficiently.

The work, published online today [14 July] by Nature in Scientific Reports, comes from a joint team of scientists from Rothamsted Research and the University of Greenwich. It shows how insects rise in updrafts but at a slower speed than the surrounding air, and slower still as air speed increases, and fall freely in downdrafts, often faster than the surrounding air.

“Small migratory insects are lazy hitchhikers, using updrafts to fly upwards when the going is easy but barely resisting downdrafts when the going gets tough,” says Charlotte Wainwright, co-author and meteorologist at Rothamsted. “These findings will help scientists to predict when and where these pests will strike next.”

The team, for the first time with such a large dataset, tracked the vertical movement of insects in convection currents using data from high-resolution cloud radar to pick them out and from the pencil-sharp laser beam of Doppler lidar to plot their speed.

“These instruments are built, operated, and maintained for meteorological applications, and insect observations are generally considered a worthless by-product,” says Phil Stepanian, co-author and meteorologist at Rothamsted. “While useless to some, these measurements are pure gold for entomological studies, which have revealed the flight behaviour of millions of insects as they navigate a churning atmosphere.” 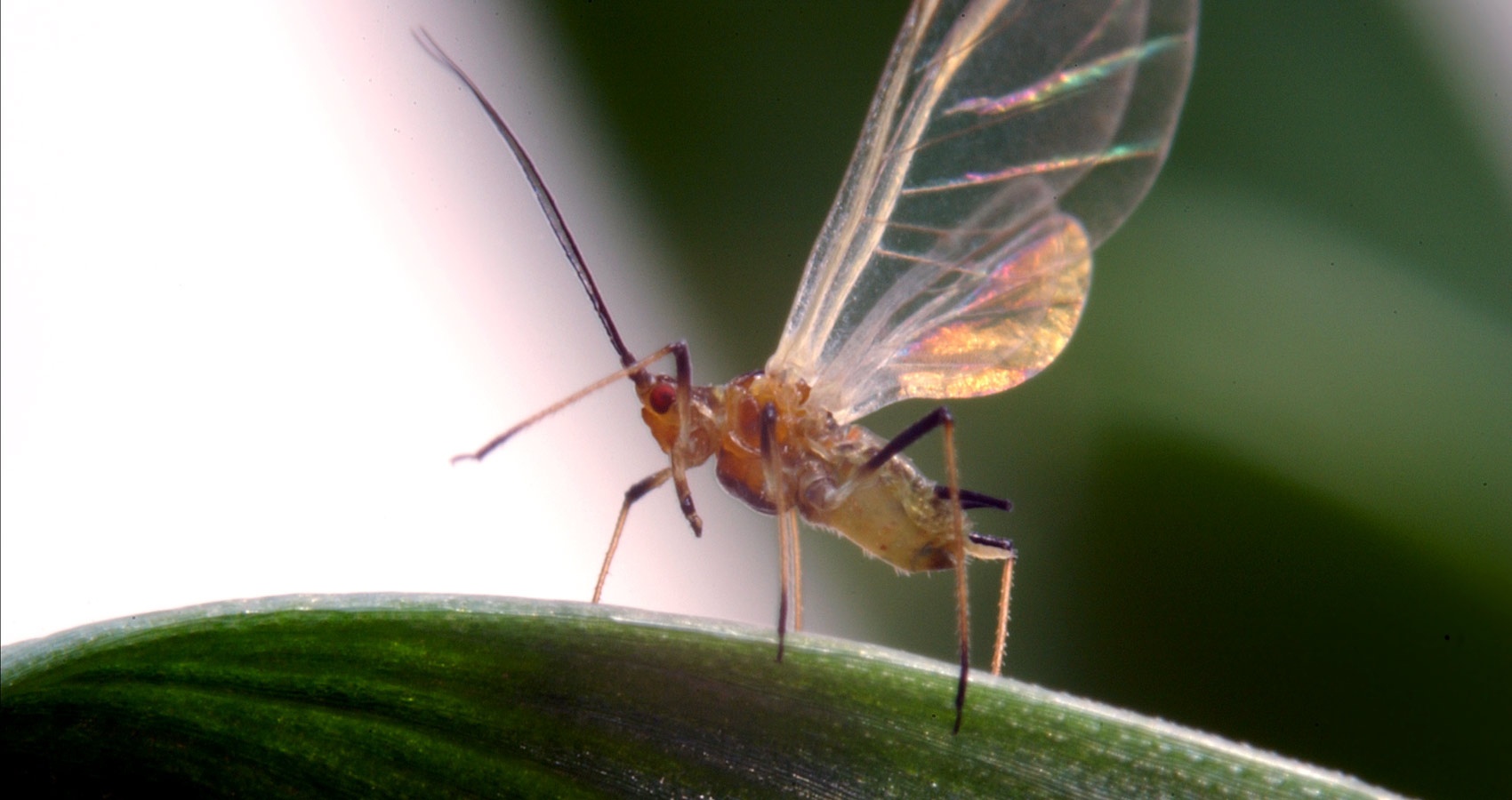 Pictured: An English Grain Aphid (Sitobion avenae) – one of the lazy opportunists of the sky ways – poised for take-off

For past research, much of it at Rothamsted, scientists relied on nets tethered to barrage balloons to gauge insect densities and predicted dispersal with weather models that simulated aerosol movement.

The latest research shows how insects travel differently to aersols, and so disperse differently, which emerging mathematical models, based on observations from field trials at Rothamsted in the 1940s, have confirmed independently.

“It was immensely pleasing to see that the idiosyncratic behaviours of minute insects flying hundreds of metres above our heads in turbulent airstreams were predicted accurately by a mathematical theory that was crafted on a whiteboard months before the observations were processed,” says Andy Reynolds, co-author and theoretical physicist at Rothamsted.

A further achievement of the research is the way that it links observed density profiles of insects in the atmosphere to insect behaviours, a linking of patterns and processes that is a key objective of movement ecology.

“Rothamsted has a proud history of quantitative insect migration studies – pioneered by C.G. Johnson and L.R. Taylor – and it’s good to be able to revisit some of the questions they pondered and resolve them with modern technology,” says Don Reynolds, co-author and entomologist at Greenwich.

Wainwright acknowledges the team’s debt to the past. “Rothamsted has a longstanding history of innovation in radar entomology, and by bringing together the unique skills and experience of entomologists, meteorologists and physicists, I am delighted that we have been able to utilize equipment normally reserved for studying clouds and turbulence to infer the vertical movements of small insects,” she says. “Our study builds on earlier work performed here at Rothamsted and further proves that small insects are not passive tracers being blown with the wind but have some degree of control over their movements.”

The Natural Resources Institute (NRI) is centre of excellence within the Faculty of Engineering and Science of the University of Greenwich. Based at Medway since 1988, NRI joined the University of Greenwich in 1996. Since the official opening of the Imperial Institute by Queen Victoria on 10th May 1893, NRI and its predecessors have undertaken research, consultancy and training in support of the management of natural resources.

NRI has a multi-disciplinary approach that uniquely integrates capability in scientific research and technology development with capacity in agricultural economics and social science in order to achieve sustainable benefits for the developing world. Leading-edge research, carried out in the field, on agricultural stations, and in the laboratory lies at the heart of the work of all of NRI's operational departments, underpinning the development and capacity building work that the institute undertakes."