A new study highlights the complexity of plant lipid metabolism, the challenges of manipulating biosynthetic pathways and the rewards of being able to predict outcomes.

Metabolic engineers have moved a step closer to sourcing fish oils from fields rather than from the oceans with a trio of successful research findings that support the commercial cultivation of a transgenic variety of Camelina sativa, one of Europe’s oldest oil seed crops.

They have reproduced results showing that the transgenic plants can grow in the field; they have matched the seeds’ biosynthetic products more closely to those of their marine counterparts; and they have identified the potential for even greater oil storage in the seeds.

The work, published online today by Nature in Scientific Reports, comes from a collaboration between Rothamsted Research and the University of North Texas. It appears as pressure mounts on traditional supplies of fish oils, which are vital nutrients for human health.

“Demonstrating that our GM camelina works in the field under real world conditions confirms the promise of our approach,” says Johnathan Napier, Leader of the Camelina Programme at Rothamsted, which led the research. “Having a viable land-based source of omega-3 fish oils can really address the ever-increasing demand for these healthy fatty acids”

These two nutrients are important in countering the relentless global rise in cardiovascular disease and metabolic disorders. In camelina, they also come without the contamination associated with some oceanically-sourced fish oils, such as that from heavy metals, dioxins and polychlorinated biphenyls (PCBs).

EPA and DHA are normally produced in abundance only by marine microbes. Growing demand for these fatty acids, especially from the aquaculture sector, has so pressurised supplies that farmed fish now contain less of these nutrients than 10 years ago.

“We believe that combining our expertise in advanced metabolite imaging with Rothamsted’s skills in metabolic engineering has given new insights into how seeds make different oils, and excitingly, points to new ways to boost the accumulation of important fatty acids such as these omega-3s,” says Kent Chapman, Co-Director of the BioDiscovery Institute at UNT. 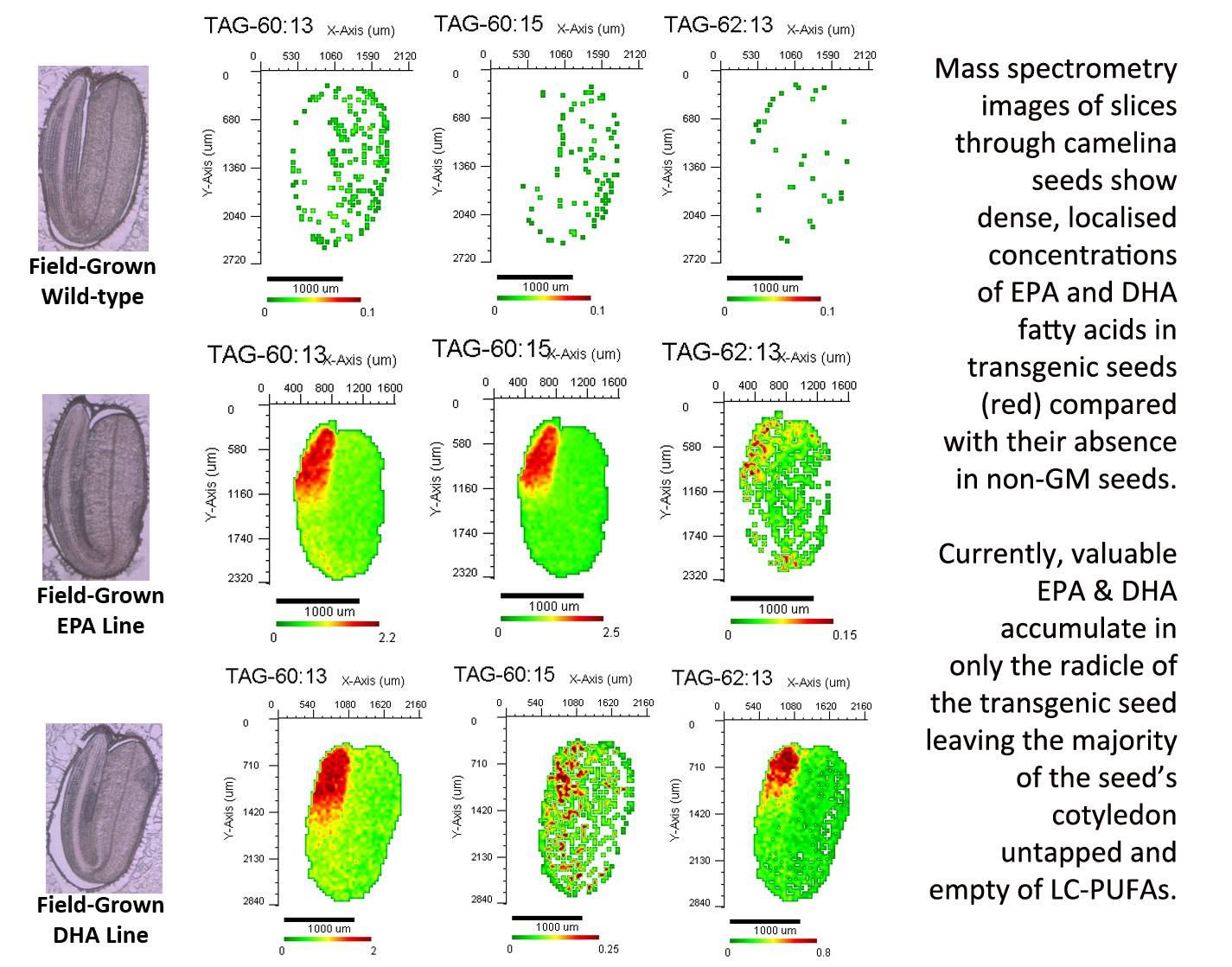 The latest research records how a second year’s field trial of GM camelina in 2015 confirmed the results from the previous year. It also shows how the team was able to reduce the level of unnecessary omega-6 fatty acids in the transgenic seeds to match more closely the mix in marine fish oils.

Furthermore, the latest research highlights the previously unrecognised and huge untapped space in camelina seeds for accumulating fish oils. Currently, valuable EPA & DHA accumulate in only the radicle of the transgenic seed leaving the majority of the seed’s cotyledon untapped and empty of LC-PUFAs.

“It is very significant that we can tailor camelina oil to accumulate omega-3 fish oils and that this trait is stable in field-grown plants. Furthermore, our new and unexpected insights into fatty acid accumulation across the seed points towards further opportunities to optimise this,” says Napier. “I am convinced that transgenic plants such as ours can help reduce the pressure on oceanic sources of fish oils, and this study brings that one step closer to reality.”

Further comment comes from Les Firbank, Senior Research Fellow at the University of Leeds: “Concerns are rising that food security is not just about providing enough calories for people, it’s also about providing the right nutrients. The health benefits of omega – 3 are well known, but it’s becoming a real problem that they are currently synthesised by marine microbes, even though we actually eat them from fish. The news that we may be able to produce these compounds at a commercial scale from crops is therefore really exciting, and demonstrates the potential for modern biology to address the challenges of providing us with healthy nutrition.”

Penny Hundleby, Senior Scientist at the John Innes Centre, adds: “This is an excellent finding and clearly demonstrates the science is there to better utilise our crops to deliver products in a more sustainable and greener way.  To consumers, an Omega-3 food supplement sourced from plants instead of adding to the pressures already faced by overfishing, should sit well with environmentally conscious individuals – however, whether the gains will allow them to see past a GM label is another thing.”

Funding for the work came from the Biotechnology & Biological Sciences Research Council in the UK; the imaging studies were supported by the US Department of Energy and the Hoblitzelle Foundation.

About the University of North Texas

The University of North Texas, founded in 1890 and based in Denton, is a major public research university deeply committed to advancing educational excellence and preparing students to become thoughtful, engaged citizens of the world. Its BioDiscovery Institute delivers research solutions to underpin the utilization of plants, forest products and other biomass for production of biopolymers, new bio-based materials for construction and transportation, bioactive small molecules and biofuels. The institute operates through a pipeline linking sustainable plant production platforms, metabolic engineering and the development of new materials. The institute includes a multidisciplinary team of researchers committed to collaborating on large research projects with an emphasis on application of findings and solutions to meet market issues and needs.